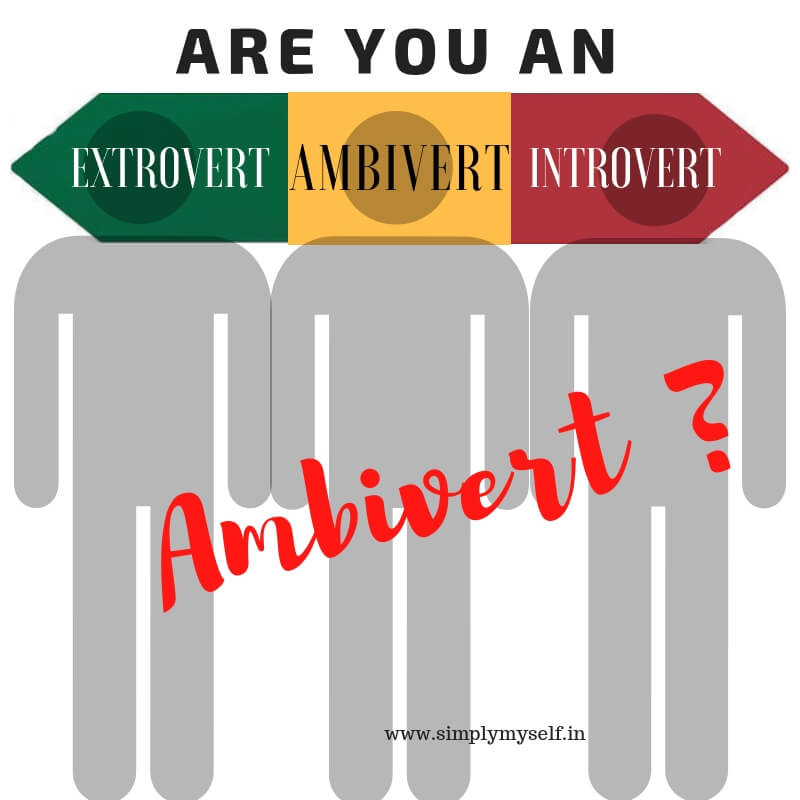 I know Ambivert is a new word in your personality traits dictionary. So let me start with a question. Are you an Extrovert or introvert ?

How often have you been asked this…. by yourself ?? Because others would not bother to ask you this question. They will simply categorize you as one or the other way round. One can never think that a person can be an ambivert. This is so because they have restrained their minds only towards the extremities of other people’s personality. (woww !an oxymoron..ha…) .

We never thought of the possibility of existence of a third trait which settles itself somewhere between the two extreme polarity traits – Extroversion and introversion -which is Ambiversion– the intermediate state.

An Ambivert is basically an extroverted introvert. A person having a balance of both extrovert and introvert features in his/her personality. If you have never heard this term or have always been confused about which one is you …extrovert or introvert?…then you should read this article. I feel after reading it, many of you can take a stance about your own personality.

Benefits of being an Ambivert

Being an ambivert, I think, is the best personality a person can have….and why do I think so? Well, if you are an ambivert :

While going through the above points, most of you must have been thinking  “Oh yes !this is so ME! ” That’s true because majority of us have this special trait. It is like making best of both the extreme personalities. But because of the low self-awareness ,we struggle. But now, you have a reason to state why you have the best personality. As one of the excerpts from a Shakespeare’s play states :

” It is no mean happiness to be seated in mean “.

So , are you too seated in mean position? Let me know which of the three traits best describes you.

3 thoughts on “Are you an Ambivert??”