As our own desi, favourite comfort food Khichdi gets international tadka of fame and at the same time the clutch of few Indian words make their entry into the Oxford Dictionary, it seems like not only Indians but Indian-ness is also in trend . Oct-Nov 2017 witnessed a rapid succession of three Indian news making their way to the global headlines. 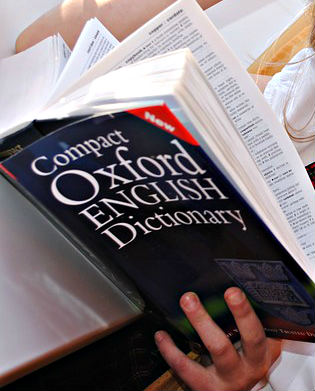 The second and third news were about food. KHICHDI– an Indian dish consisting chiefly of rice, lentils, cereals and spices -has been selected as ‘Brand India Super Food’ because it truly depicts the spirit of India, unity in diversity. I can presume then, it could soon become India’s national food.(In case you believed in the reports stating khichdi as National food, it has already been declared fictitious…for the time being)

Meanwhile, the third news came making Khichdi the show stealer. By preparing a whooping 918 kilograms Khichdi at a global event in Delhi, India has set a world record and Khichdi enters into the Guinness Book Of world Records now.

Undoubtedly, the news has made every Indian swell with pride.

But there are few more, having no connection with taste but with words; Indian words.

When Mr. Amitabh Bachchan declared in his much popular dialogue ‘English is a very phunny language’, common man took it seriously and to give English a facile temperament, we prepared a Khichdi named Indian English. English remaining constant, a desi tadka of various native languages was put to make it a more digestible food. Here are a few examples of this variety. Have a taste.

The words ‘cousin brother’, ‘cousin sister’, ‘Prepone’ have been conveniently invented by Indians. If I say my cousin is coming from NY, you would be forced to think whether a male or female. So we have improvised it and made an ideal Khichdi. Moreover, there is nothing wrong in the usage of these words as it serves (pardon the Pun) the purpose. That might be the reason why ‘prepone’ has been included in OD. You never know, the other two special Indian words might also make their place in it soon.

When two cultures are exposed to each other over a long period of time, the words blend in and form the English suffixed Hindi words such as Patao-fy, Muska-fy, Pakao-fy.

Then comes the usage of the words “no”,”na” and “only”. When we end a sentence with the negative words na or no, it implies we are thinking positive and need a positive reply, a proper example of bittersweet Khichdi.

I am like that only. (main toh aisa hee hu). Now this is again not our fault as there is no direct equivalent for the word ‘hee’ in English.

Next comes the usage of the word ‘Khichdi’ itself but in a different sense.

When someone says ‘ Kuch toh khichdi pak rahi hai‘- means something fishy is going on here.

Then there is the famous historic ‘Birbal ki khichdi‘. If your boss asks you Birbal ki khichdi bana rahe ho kya? Don’t be elated to think that your boss has appreciated your culinary skills, he actually means you are taking much more time to do a work than usual.

Lastly, the proverb ‘Apni khichdi alag pakaana’  which is used when someone fails to agree with the majority and decides to go his own way.

Now I am fully convinced and impressed by the decision of making Khichdi as Brand India Super Food. After all, It not only improves our overall health but also influences us linguistically and helps in easy communication.

Who knows if Indians make a Guinness record in making maximum variety of ‘Khichdi of Words’; Indian words.