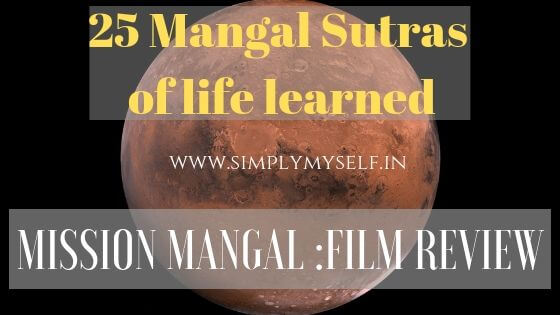 I am so excited to write this review on the film ‘Mission Mangal’ and why I call it ‘Mission Life’, but before that let me tell you all that I am writing a film review for the first time.

Same as India launched the Mangal Yaan mission for the first time and succeeded.

Same as the women scientists are portrayed as the real-life heroes in the film for the first time.

Same as The first-time director Jagan Shakti nails it with superb direction.

To add further, first time while watching a movie I felt like having a paper and pen with me to note down what I am learning. Well I could have written on my mobile notepad, but the fantastic acting, direction and the picturization could not let my eyes go off screen.

I don’t have to recall what I saw because some movies make that lasting impression and to assure myself that the lessons last with me for a long time, I am writing it.

The movie, as you all know is about India’s one of the most successful and proud scientific projects- Mission Mangal Yaan. India has launched and successfully landed its satellite on Mars at first attempt. First-ever country to do this and I am so proud to say that with this we have too landed on the seat of supreme position in research.

Well, I will not go into detail, because I think every proud Indian knows about this and if don’t YOU SHOULD!!

What I am going to discuss today is my feelings while watching the movie, what I loved about the movie and the valuable lessons of life it brings with the story.
The lessons which should be adopted by every one of us.
I have named these as Mangal Sutras and below are the sutras I got to learn from Mission Mangal.

The Mangal Sutras of life I learned from Mission Mangal

Sutra 1: Inspiration is all around us. We need keen eyes to see it.

We can get inspiration from our daily life, through daily mundane chores. It is just that we need to observe and be open to grasp it. Just imagine how the most successful ISRO mission has got inspired ? From PURI . Yes, the procedure of frying puris.

So, if you are stuck in a situation and need the inspiration to propel you further. Observe your surroundings carefully. An idea is waiting to get launched by you.

Sutra 2: Frugalness is not miserliness.

Rs.4000-6000 crores worth of project can also be successfully completed with money as less as Rs. 400 crores by being frugal and innovative.

The movie shows how Tara Shinde(Vidya Balan) proposes to use the instruments of Chandra Yaan into the project Mangal Yaan rather than purchasing new materials and Rakesh Dhawan(Akshay Kumar) touches her feet acknowledging “Home science of every bhartiya nari. Why waste !”

Sutra 3: The supreme power is beyond science and religion.

We argue over the superiority of our respective religions and God wonders how the tectonic plates have rifted our hearts apart too.

A scene when Vidya Balan’s son asks why she does so much of ‘pooja path’ despite being a scientist. She says God is beyond science and also gives a valuable lesson to pray the supreme power and never to lose trust irrespective of which religion you prefer.

Sutra 4: You need the fire burning to achieve your dream.

Until and unless you have the fire inside you to do something, you can’t achieve your goal. the scene which gave me this reminder was when Akshay Kumar tells Vidya Balan that she is passionate about this project because it’s her dream but the other associates consider it as job.(tumhare liye ye Dream hai par bakiyon ke liye ek naukri).

Unless one comes out of their fixed mindset and their comfort zone, the success flame cannot be lit.

Sutra 5: Never lose the dream you saw in your childhood.

When Tara reminds each one of her associates when and why they decided to become a scientist and today when they have got the opportunity to live their childhood dream, they should be passionate about it.

Never regret in life thinking about your childhood days and say ” Those were the days.” The days of dream can become a reality with your passion and winning mindset.

When Akshay Kumar breaks the conventional wall clock and places the timer instead, to remind everyone how much time they are left with to finish their project mangal, it teaches us the lesson to not lose even a fraction of time.

Sutra 7:Listen to your heart.

When everyone laughed over the initiation of Mangal project in a less powerful PSLV, in the meager budget, less time and with inexperienced staff, Rakesh(AK) took the challenge head-on.

So, when your heart says you can do it, believe yourself.

Sutra 8: Sometimes you get a good point to ponder even in the Negative criticism.

Though Rupert Desai (Dalip Tahil) has given many hindrances to the Project Mangal, all his points were well listened and one negative remark is pondered and worked upon. This reminds me of an extract from Rudyard Kipling’s poem “If”

“If you can trust yourself when all men doubt you,
But make allowance for their doubting too”

Sutra 9: Switch off and switch on. Reboot.

The scene when Kritika Agarwal’s (Tapsee Pannu) husband suggests to switch off the computer and then switch on to recover it from a hang, she applies the same idea to re-establish the connection between them and the space-bound mangal yaan.

So, when life gets stuck, Reboot yourself. Stop for a while to calm your brain, relax your heart and re-establish the connection between you and your subconscious.

Sutra 10: Remove the unnecessary weight from your heart and brain to reach your goal sooner.

Exactly the way they did everything to make the Mangal Yaan lighter. Imagine if we make a point to minimalize our necessities of life, life would then become simpler and happier.

Sutra 11: Don’t lose your cool even in the worst scenario.

Akshay Kumar, as always, has flawlessly fit himself into the character. He makes sketches when others suggest to learn something from NASA. He sings songs even in tensed situations, readily accepts his project transfer and never loses his cool.

On the failure of Mission Control, ISRO handed over to Akshay Kumar its near impossible Mars mission, which AK calls ” a way of resigning quietly”. Still, he takes charge and transforms this challenge into an opportunity.

So, if life tosses a challenging situation, catch it right there. This could be the key opportunity for your biggest success.

Read this to know more:

Sutra 13: Hit hard at the spot and at the right time.

The satellite is fired exactly when it reaches perigee, and this method takes it off to the orbital vicinity of Mars.

As a famous dialogue goes from the film Sholey “loha garam hai maar do hathoda.” , similarly don’t let the opportunity slip off your hands.

Sutra 14: Life’s problems should not be the excuses to step back.

Whether it was Kritika’s(Tapsee Pannu) dharm-sankat between joining the mission again or taking care of his husband injured in a battle or Varsha Pillai’s (Nithya Menon) pregnancy news; they did not step back from their duty.

Problems will always be there in life. That cannot let us lose our track and let go of our goals.

Sutra 15: Good parenting starts with giving space to the child.

The contrast between the relationship shared by Vidya Balan with her children on one hand and her husband (Sanjay Kapur) with his children give us food for thought over good parenting.

The project itself has been named mission MOM(Mars Orbital Mission). The first scene of Tara Shinde doing household chores hurriedly and arriving on the launch day of mission control( though I never liked the way husband and kids did not help a bit) and later the metro scene when women show they can not only self defend but protect others too was also a moment of pride.

Read this to know more:

Sutra 17: You don’t need a reason to be happy. Celebrate each moment.

After the failure of mission control Rakesh Dhawan(AK) is asked in the press meet why he is eating ” laddoo” in this situation. his reply makes everyone laugh in the picture hall,” kisne kaha failure mein laddoo nahi kha sakte?” Point noted sir.

Sutra 18: Never let anyone make you feel guilty of doing what you love most.

Tara Sindhe loves her job, but her husband makes her feel that no one is happy in the house because nothing is managed. I loved her reply when she said, “Don’t make me feel guilty all the time. I love my job.”

One reprimand from Rakesh Dhawan was enough for Eka Gandhi(Sonakshi Sinha) to stop using the phrase “It is impossible” and ponder again on the possibilities and the next word which came out of her mouth after this was ” bahut simple hai.”

Sutra 21: Self-respect is your priority, not an option.

A short but powerful statement from Neha Siddiqui (Kirti Kulhari) reminds us the importance of self-respect when she says she doesn’t want to live in that house which is given by her husband who has cheated on her.

The real-life characters of the movie made my heart filled with pride. Vikram Sarabhai’s picture on the wall, the imaginary conversation of Akshay Kumar with Dr. A.P.J. Abdul Kalam and his famous quote- “Dream is not that which you see while sleeping, it is something that does not let you sleep.”- kindle the fire again. These are the real heroes.

Sutra 23: Framework of mind is more important than infrastructure.

The ‘Never lose confidence’ and ‘I don’t care for your negative words’ attitude of Rakesh(AK) in his every encounter with Rupert Desai(Dalip Tahil) gives us the lesson to work on establishing a correct frame of mind, that is growth mindset, before worrying about the infrastructure.

Sutra 24: Be inspired but be original.

Tara’s advice to her son to take inspirations from others but never lose your originality, is lifetime advice for everyone. We should know the difference between getting inspired and being prone to influence.

Sutra 25: To be a true leader, take responsibility for failures.

One should have a profound trust in the team and should be brave enough to come up and take the responsibility of failure on behalf of the whole team, Like prof. Rakesh Dhawan did.

I know, this is quite an unconventional film review but I wanted to share with you all what I felt. There have been few negative parts also but today, I am not in the mood of pointing out anything negative in something which has lot more positivity to give.

And now how many stars should I give to this film?

Well… I would give it the whole space . Apt for Mangal Yaan.

Jaate..Jaate.. Have you watched this film? How did you like it? Do write to me in the comment box below.